Mediations between
the World of Beauty
and the Netherworld 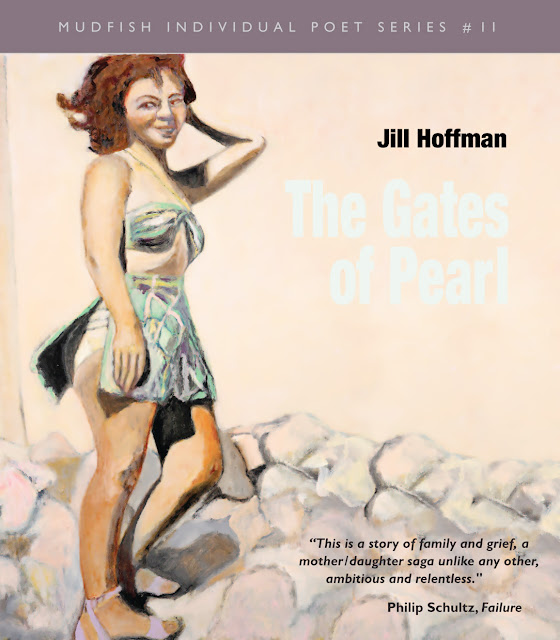 Before opening this poetry collection, the dark jewel that Jill Hoffman calls The Gates of Pearl, the reader might pause to admire the cover painting of a seemingly carefree young woman wearing a 1940’s style bathing suit. The artist chooses to work with pastels—pinks, mauves, and turquoises—the colors of seashore outings and children’s birthday parties This is our first sight of Pearl Yuni Hoffman, looking windblown and beguiling, as painted by her daughter. The painting provides a counterpoint to the unquiet passions these pages contain and gives the reader a glimpse of Pearl in her happier days. Be forewarned this collection is not written in pastels, but in dramatically vivid colors and is dangerously explosive.

When I was bingeing 4 years ago – I would steal ice-cream from my
daughter’s fridge so they wouldn’t see the gluttony. I would
steal from me own refrig as soon as my then husband was asleep –

Hoffman names herself an amanuensis. She is transcriber of her mother’s sometimes agonized and sometimes delighted voice captured decades ago in telephone conversations, the collector of Pearl’s stream-of-consciousness Overeater’s Anonymous journals, and the writer of her own Daughter-of Pearl poems. The zeitgeist of the present moment invites the hybrid in our writing texts and so the 3 braided strands analogy (Telephone Poems, Pearly’s Journal, and Daughter-of-Pearl poems) that Hoffman uses to describe the book’s structure will find a receptive audience. The Telephone Poems are not only truly innovative—the term and concept coined by the author—but astonishing time capsules, rhythmic distillations, and rap-like in their intensity and humor.

“Leper Colony of One” is illustrative of the leaps made in these Telephone Poems, the form elastic enough to hold the mother’s impressionistic and fervent voice.  She wrote one poem that she reads to her daughter over the phone.

One stanza later the lines stretch across the page.

4 beat up granny apples for raw apple sauce
Samuel Johnson said whoever writes not for money is crazy—
poetry is sheer lunacy. My lunch is already late—

Maggie Nelson’s celebrated Jane, blends her poetry with her murdered aunt’s diary. Pearly’s diary, though, is of a wholly different order, as she exhibits an originality and sensuality in her journals. Her instincts are those of a lyrical poet that reach fruition in her daughter’s work.

In her highly crafted and enigmatic poems, some published in The New Yorker and Paris Review, Hoffman addresses her mother. The poems radiate love and act as mediations between the world of beauty and the netherworld.

Take this one long exquisite slender white rose.
I throw it across Central Park to you.
It is the white snow, the red carpet, the white
cauliflower,
the plush red coach,
the white lace at his neck, your red
stays.

The poet writes of her mother, “our one soul/haggles for hours/on the phone a/golden harp.” In “Mama Pyjama,” the daughter speaks of her childhood: “You sent me out with a spoon/and your love followed me like cereal/to school.” The reader acclimates to the mother’s voice as if to a deep sea dive. Self-lacerating, she lives the metaphor of an open wound. Pearly suffers from Paget’s disease, a form of breast cancer. She speaks of the “nipple drawn to the side/where it shouldn’t be.” She divorces Stephen, her husband of forty years, and shortly after laments it. Rejecting Western medicine, she travels to a Mexican laetrile clinic, and when the treatment fails she follows another alternative protocol that includes fasting and raw vegetables. Using food as balm for her frustrations, Pearl suffers for most of her adult life from an eating disorder.

Everyone is married. Everyone I am sure will have sex when they go home. I am strangely relaxed with the food plate that has nothing on it for me. Perhaps there will be something at home for me. We try, but there is emptiness – now deep snoring – I leave the bed – I go towards an icy box -- holding out its frozen breasts and erect penis to me. I go towards its pleasures and oblivion

A mismatched couple from the start, Pearl’s husband and father of her two daughters withholds more than sex. He represses what is intimate and playful in himself. Hence, they seem never to have been true lovers. She grew to adulthood long before the sexual revolution that would come in the late 1960s. The era in which she was raised condemned a woman who desired fulfillment and Pearl was called a “nymphomaniac” by her husband.

I was hungry for sex – a juicy peach of a young woman eager to love, eager
to be loved. On our wedding night – he told me I was tired after the huge
wedding. I was disappointed but nice brides didn’t say so – I knew I was
hungry. I did not know I was angry. Who could be angry at Rhett Butler --

A female Jeremiah who never quite curses the universe, Pearl rails against the indignities of her fate. She speaks with a blazing tongue—“A pox on his soft flaccid penis.” Her bathwater bloody from her oozing breast, her foot painfully sore, her bank account overdrawn, she soldiers on and rises to the heights of the heroic. 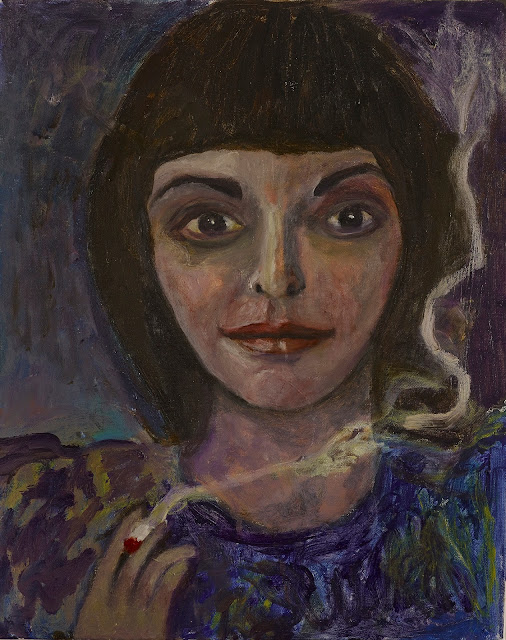 that stretch back to her youth, there seems a desire to love herself, and then more fully love life. Often her explanations are comic, her mantra-like repetitions incantatory, and as she walks close to the edge of extinction, Pearl displays an admirable and courageous determination to be “positive.” She scolds her daughter:

“You’re full of aspirin and I’m full
of positives that I don’t want
stolen from me!”

There is so much body in The Gates of Pearl, the sexual body and Pearl’s bleeding body, as if she is a human sacrifice to a Moloch.

Julia Childs was trussing a chicken for a spit, a rotisserie.
She had to bind the legs with a lot of white rope and it bothered me
a little – her treating the chicken as if it had never been alive.

After begging Steve to let her come home, to reconcile, and being refused she sees herself like Julie Childs’ chicken as if she had never been a bride, a mother, a grandmother, instead garbage to be thrown into her raw vegetable compost. 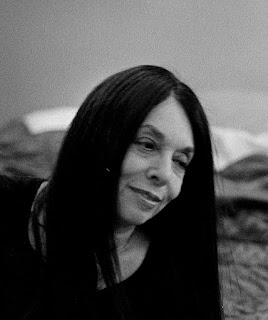 And yet there is compensation in the relationship between cherished mother and cherished daughter. If Pearl becomes Jeremiah, then the Daughter-of Pearl becomes Solomon in her songs. Listen to the daughter honor the mother in “Demeter.”

From you I learned joy, my middle name,
goddess of appetite, at whose touch
Farmer’s cheese put on a bed of lettuce
or smuggled into tomatoes in a pink and
white motif reminiscent of strawberries and cream,were compositions of originality and freshness.

In the throes of excruciating self-condemnation, we envision another mother, the one “of originality and freshness,” the one who taught “joy” to her daughter.  As Hoffman explains in the Preface, “Her life is revealed in her journals, mine half hidden in my poems.”
The daughter celebrates her own sexuality in “Joy.”

You have a mate.  Quickly
the match is announced in heaven.
Dark shadows robe you.
Everyone, but the small child, knows.
But it is not like that.  The summer light
leads up-river like a raft and the breeze
blowing in all night brings the sea
in its salty net and you are Heidi on top
of a mountain, and I am there too
near your shoulders, your eyes,
on the romantic slopes.

When the daughter’s novel Jilted, a fictional treatment of her love affair with Frank Stella, is thwarted because a character threatens to sue, we hear the mother’s desire to comfort.

I must call my heartbroken daughter Jill.  Her novel, her literary baby was slaughtered – impaled by the threat of a 5 million dollar law-suit.

Both mother and daughter have sacrificed their happiness to men who find true intimacy intolerable.  The mother to her husband, Steve, and the daughter to a famous artist.

In a Telephone Poem, the mother directs them both to “get up from our coffins.”

Pearl’s journal entries contain miraculous moments and range from riding on the bus with a painful foot that afternoon to early childhood remembrances. “It was a few days before my sixth birthday.” She and her pregnant mother were going to Lofts to order birthday chocolates. Her mother, pregnant with a son, got into line to pay. The man behind her set down his valise and her mother tripped and fell. “I lost my baby brother. I lost my childhood that day.”

There are comparisons that could be made to Mary Gaitskill’s Veronica, an older woman dying of AIDS given to her by her bi-sexual lover, or Jean Rhys’ vulnerable and abandoned protagonist in After Leaving Mr. Mackenzie, even to Cynthia Cruz’s opulent post-confessional How the End Begins. While there are echoes, The Gates of Pearl is an exemplar. Nothing like it has graced bookstore shelves or the Amazon marketplace.

“I cannot tolerate the lack of interest in men’s eyes,” says Pearl, our doomed heroine, our Ulysses of the piss-smelling elevator and jostling bus.

This time there will be no lack.


Stephanie Emily Dickinson raised on an Iowa farm now lives in New York City. Her novel Half Girl and novella Lust Series are published by Spuyten Duyvil. Other works include Corn Goddess, Road of Five Churches, and Port Authority Orchids. She and her partner Rob Cook publish Skidrow Penthouse.

Posted by Nirala Publications at 9:22 AM 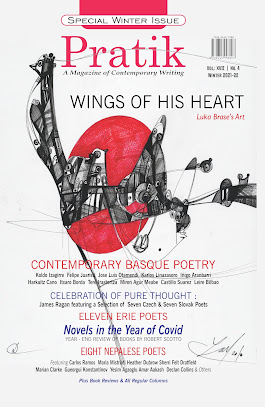 Pratik :Summer/Fall 2021 (Click on the Image for Amazon Link) 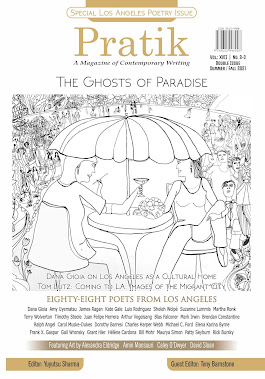 Pratik: Spring 2021 Issue (Click on the Image for Amazon Link) 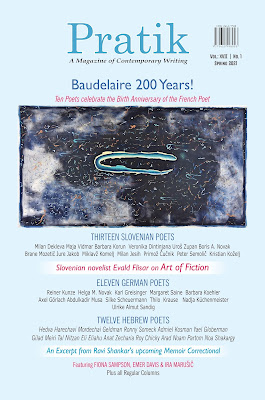 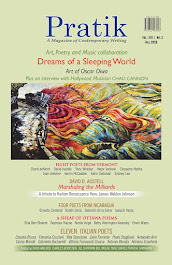 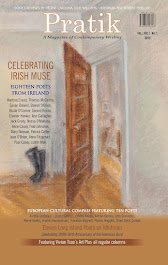 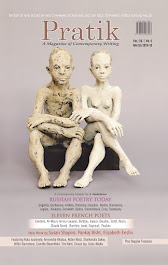 Pratik: Summer/Fall Issue, 2018 (Click on the image for Amazon link) 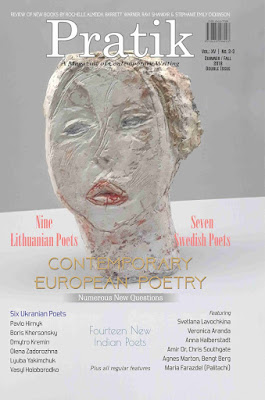 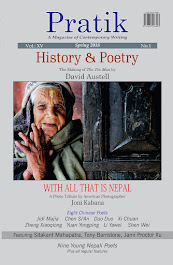 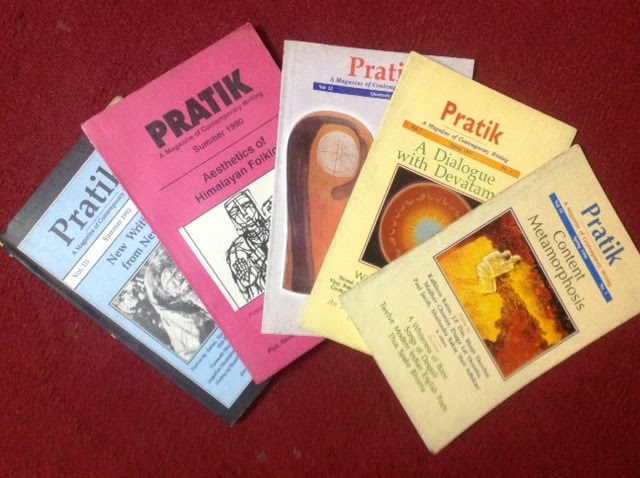 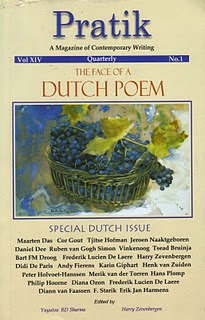 The British Issue (Click on Image for Amazon Link) 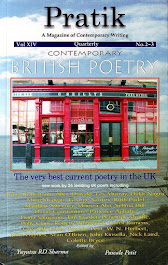